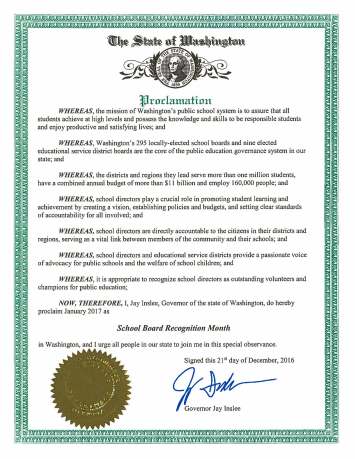 Every January school districts across the state and nation honor their board of directors during School Board Recognition Month.

The Olympia School District will recognize its school board with a special program near the start of the meeting on Monday, January 23. The meeting begins at 6:30 p.m. at Capital High School, 2707 Conger Ave. N.W. in Olympia.

During the program, Superintendent Dick Cvitanich will read a proclamation by Gov. Jay Inslee designating January as School Board Recognition Month in Washington state. This marks the 22nd year of the annual observance initiated by the National School Boards Association in 1995.

The proclamation reads in part that school directors “play a crucial role in promoting student learning and achievement by creating a vision, establishing policies and budgets, and setting clear standards of accountability for all involved.” It also states that school directors “are directly accountable to the citizens in their districts and regions, serving as a vital link between members of the community and their schools.”