The Olympia School District has selected two educators to be honored as this year’s Elementary and Secondary Teacher of the Year. 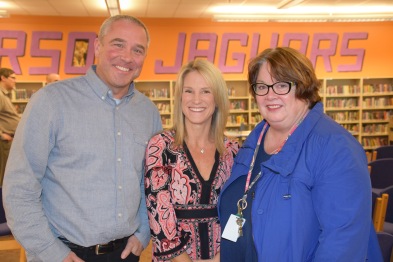 This year’s OSD Elementary Teacher of the Year is Nancy Hooper, a third-grade teacher at McKenny Elementary School.

Hooper and Charette received engraved plaques and standing ovations at the Olympia School Board meeting on March 27.

The two educators were selected for the award from among 32 employee names submitted during a nomination process open in February to employees, students and the community. A selection committee made up of district staff, a community member and a school board member assumed the difficult task of reviewing the nominations of these outstanding individuals. The committee eventually decided on an elementary and a secondary OSD Teacher of the Year.

Superintendent Dick Cvitanich and School Board President Eileen Thomson announced the winners and presented them with flowers in front of their colleagues during school staff meetings in April.

Any Washington public school teacher who has a current certificate and works directly with students for at least 50 percent of his/her time is eligible for the Washington State Teacher of the Year recognition program.