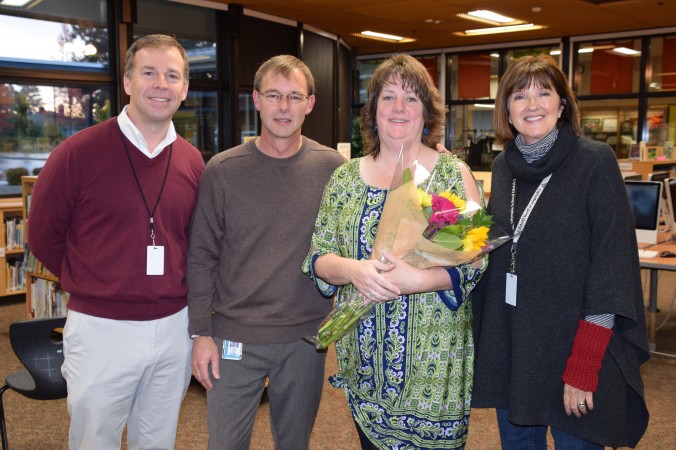 The announcements came as a surprise, and each one was filled with emotion ranging from tears and cheers, to standing ovations and hugs.

All three will be honored at a special recognition ceremony during the November 20, 2017 Olympia School Board meeting. The meeting starts at 6:30 p.m. at the Olympia Regional Learning Academy (ORLA), 2400 15th Ave. S.E., Olympia.

The district received nearly 40 nominations from throughout the district. A screening committee made up of OSD employees and community members reviewed the submissions and recommended the three names to Superintendent Patrick Murphy.

Murphy, School Board President Eileen Thomson, and school leaders announced the winners and presented them with flowers during impromptu staff meetings.

Classified School Employee of the Year is an annual statewide awards program through the Office of the Superintendent of Public Instruction. It begins with local nominations from school districts throughout Washington. Those individuals have a chance of then being named a regional Classified School Employee of the Year, which allows them to advance to the state competition.

The State Superintendent of Public Instruction recognizes the regional finalists and announces the state Classified School Employee of the Year at the annual spring award ceremony at the Old Capitol Building in Olympia.

The state award winner and regional finalists are invited to several annual recognition events including the Governor’s Reception for Exceptional Educators.