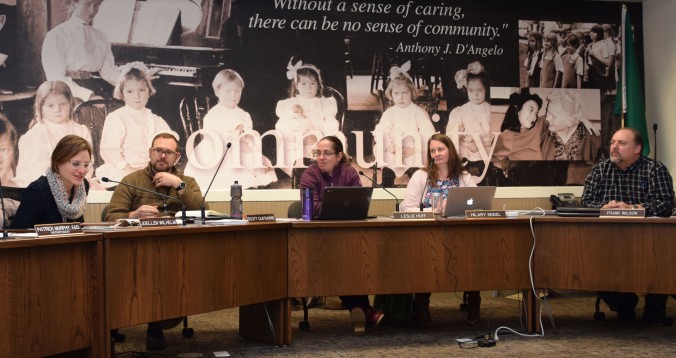 The Olympia School Board unanimously agreed on April 8 to authorize the superintendent to prepare a “Reduced Educational Plan” that outlines possible budget reductions for the 2019-20 school year to address a projected $8.5 million deficit.

Specifically, the board instructed Superintendent Patrick Murphy to prepare a 2019-20 school year operations budget under which “expenditures are no greater than revenues and the (unrestricted) fund balance is at least the minimum allowable by board policy.” Additionally, the board asked Murphy to prepare a budget that reduces staff for 2019-20, “including certificated supervisory and nonsupervisory positions and such classified positions as may be necessary, to achieve the district’s financial objectives.”

Superintendent Murphy noted that there is a strong likelihood that the current projected deficit will be reduced significantly, but staff won’t know for sure until the legislative session is complete. The session is scheduled to end on April 28, 2019.

Jennifer Priddy, assistant superintendent of finance and operations, shared the projected impact of the deficit based on current budget proposals being considered by the House and the Senate. Either budget, if enacted, would cut the deficit by more than half to approximately $3.6 million. She said both budgets include changes to the local levy law that is still a contentious issue in the Legislature, so it is difficult to know at this time if either will be enacted.

The board’s decision was preceded by several budget-related reports at previous meetings. Priddy also shared the results of a budget priorities survey, which was open to students, staff and the community. Priddy shared results of both forced-choice questions, as well as narrative responses to prompts including “Describe what you value about our school system” and “Describe what efficiencies you would like the superintendent to consider.” The survey results are posted on the district website.

Assistant Superintendent Priddy also shared a report about the development of the 2019-20 school year budget, including background about the district’s projected $8.5 million deficit — equivalent to about 6 percent of the district’s operating budget. This deficit is the result of state funding changes the Legislature enacted because of the state Supreme Court’s “McCleary” ruling in 2017. View a copy of Priddy’s report on the district website.

Superintendent Murphy outlined the effects of the so-called “McCleary fix” legislation on the Olympia School District in a March 15, 2019 letter to the community. The letter is posted on the district website. The state Legislature is in session and is currently considering some proposed legislation that could reduce the total deficit.

He and Priddy also outlined the impact of the so-called McCleary fix in a recent Olympia School District Facebook Live video. View the video on the district website.

The school board also heard a report during the April 8 meeting about staffing reduction considerations for the 2019-20 school year, including projected staff attrition. View a copy of that report, prepared by Executive Director of Human Resources Scott Niemann, on the district website.